How Can This Ayurvedic Food Make You Feel Great?

With the cool winds of autumn beginning to blow through many regions, you may find your body feeling cold and congested, longing for warmth and comfort. Battling the cold may seem like a necessary evil as fall deepens into winter. Yet, a simple remedy for cold hands and feet may be as close as your everyday spice rack. Long relied upon for its stimulating effect on the circulation, cinnamon warms your blood and your body into coziness with its sweet taste and powerful punch. The warmth it brings to cold hands and feet has also been used for conditions like Raynauld's Syndrome.

Expectorant for Your Lungs
Cinnamon not only helps your hands and feet, it stimulates circulation especially in the lungs and joints. It's pungent spiciness warms up the lungs and liquefies mucus congestion. You may have noticed that when you make tea with cinnamon, a thick, gooey substance settles to the bottom of your cup. This gooey property is called demulcent among herbalists and helps you expecorate any thick, kapha like mucus adhered to the bronchial tubes. Cinnamon's demulcency also coats the throat, soothing it. For best results, gargle with cinnamon, or squeeze a wedge of lemon into an herbal tea with 1/4tsp cinnamon.

Regulate Blood Sugar Levels
Cinnamon is a popular garnish atop many desserts. While many of us choose cinnamon in desserts for its unique taste, this choice also reflects the body's innate wisdom. Cinnamon regulates blood sugar and its stimulating pungency makes it perfect for heavy, sweet foods. Cinnamon also regulates metabolism of fats and sugars, helping with type II diabetes and insulin resistance.

Freshen Your Breath
Cinnamon's taste freshens the breath and is used in many commercial products. Natural anti-microbial properties in cinnamon cleanse the mouth, addressing the root cause of bad breath. Its stimulating fresh taste can also be used to quell nausea and stop vomiting. As an analgesic cinnamon is useful for toothache. Just take a pinch of the powder and apply directly onto the tooth.

Digestive Health
Like most pungent spices, cinnamon rekindles digestion. It is a favorite additive to counteract the mucus provoking qualities of dairy. Cinnamon's anti-microbial qualities also reduce gas and fermentation in the GI. Cinnamon's mild astringency is also useful in infant diarrhea and diarrhea from cold digestion. To increase astringency combine cinnamon with chalk or activated charcoal.

A Personal Experience of Cinnamon from Joseph's Journal January 16, 2010

The best way to experience an herb is on an empty stomach, early in the morning. Then sit on a comfortable pillow with eyes closed and examine its effects on the body. Each person will have a unique and different experience to share when sampling an herb. Here is an entry from John Immel's Journal after drinking a strong tea of cinnamon:

I experienced a rough palate and tension in the throat (evidence of astringency), pain in the back of head (high Vata due to astringency), throbbing of blood vessels in the temporal lobe (evidence of circulatory stimulant), opening of air passages, pressure in the lungs, increased heart rate, decreased sensitivity of the skin (analgesic effect), cooling of the eyes (alterative effect), expectoration which cleared my sinuses, and within a half hour, hunger. Initially I experienced the stimulating and upward moving qualities of cinnamon. Then as the heat warmed my Vata I became tired and fell asleep for several hours. Visually, cinnamon reminds me of the dry, cracked red mud of the desert

Other Properties of Cinnamon
Cinnamon warms and stimulates the heart, liver, kidney and spleen. It disperses deep cold, alleviates pain from stagnation of blood and prana, and encourages generation of prana and blood. Cinnamon is used to treat upper heat and lower cold. It appears in topical formulas for premature ejaculation perhaps due to its analgesic and warming qualities. Don't try this at home - cinnamon burns! 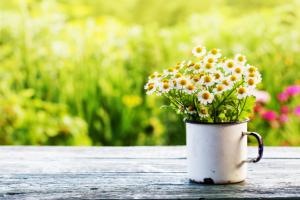